The Importance of Annual Leave

Please click here to download our HR Support Staff Apprenticeship brochure! This programme teaches staff all of the fundamentals of HR and how to provide fully compliant HR advice; it also includes CIPD Membership which is crucial for any HR professional.

How have annual leave laws evolved over the years? Where did bank holidays come from? Why did Richard Branson allow his staff at Virgin unlimited annual leave?

In this mini-article series, we discuss all things annual leave-related. If you missed our previous article about why it’s crucial to take time off work and 10 tips you may not know about annual leave, you can click here to catch up with that article.

So what is the true history of annual leave and bank holidays?

The Fight for Annual Leave

In most countries, there is now a statutory entitlement to paid leave. These are the 5 top countries for annual leave:

However, this wasn’t always the case… 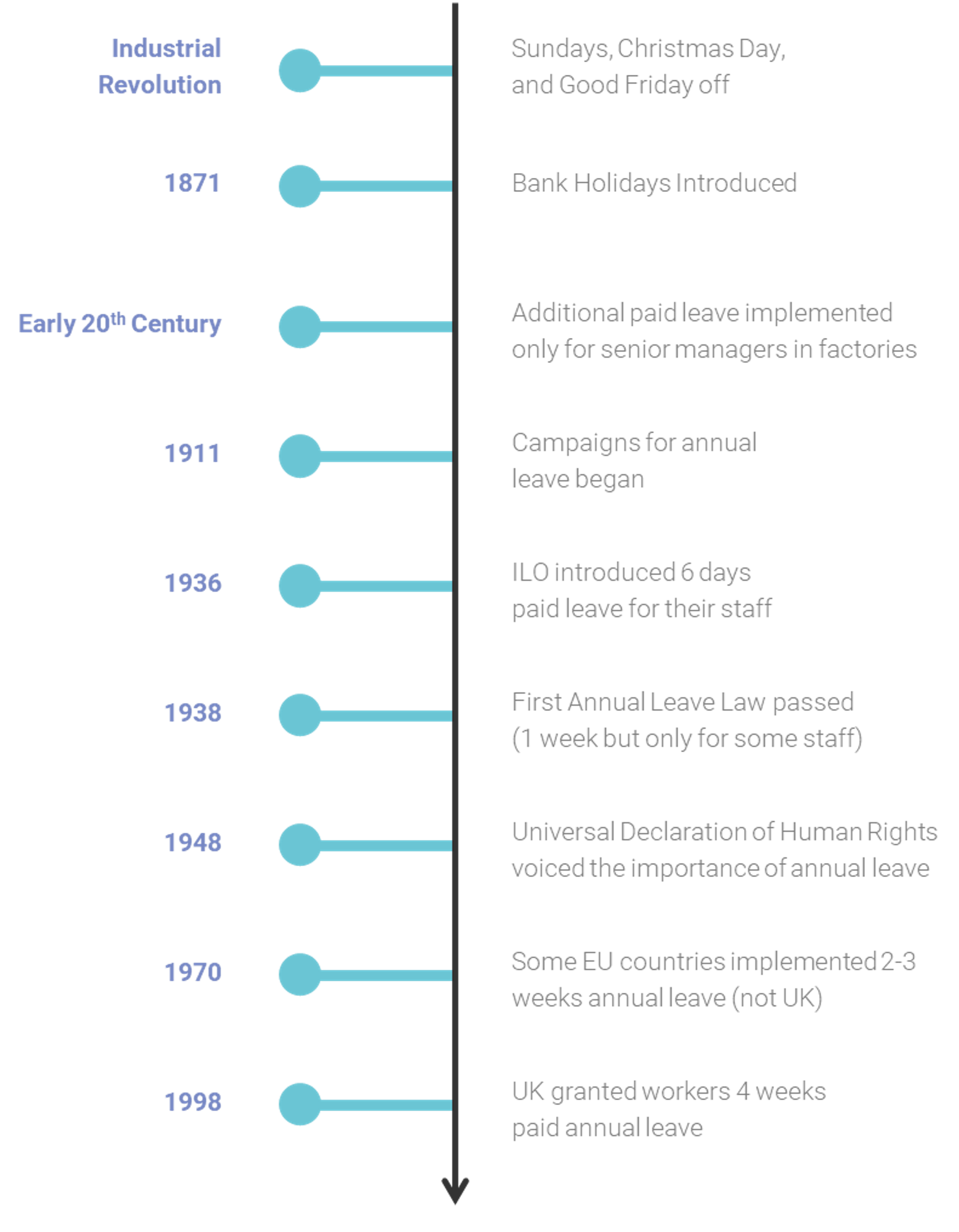 As this timeline shows, it took over 120 years of campaigning for annual leave to become a statutory right. In the first 80 years, progress was extremely slow and then, in the last 40 or so years, the UK made a drastic change and quadrupled workers’ annual leave entitlement, suggesting that the importance of annual leave suddenly became evident to them, causing them to act quickly.

On September 23rd 2014, Richard Branson, owner of Virgin Media, published an article that revealed that he was scrapping Virgin’s existing annual leave policy and instead, allowing his staff to "take off whenever they want for as long as they want". In his article, he stated that he made this bold move because of an article his daughter had forwarded to him about how Netflix had made a very similar decision.

"It is left to the employee alone to decide if and when he or she feels like taking a few hours, a day, a week or a month off, the assumption being that they are only going to do it when they feel 100% comfortable that they and their team are up to date on every project and that their absence will not in any way damage the business - or, for that matter, their careers! We should focus on what people get done, not on how many hours or days worked. Just as we don't have a nine-to-five policy, we don't need a vacation policy."

Keeping Up with HR Laws and Policies

As the majority of organisations continue to grow and expand, and as staff are becoming much more aware of their entitlements, it’s more important now than ever to ensure that your organisation keeps up with ever-changing HR laws and policies. It’s especially important to give HR extra thought and consideration as we leave the EU as there is an extremely high chance that some HR-related laws will change.

One of the most effective ways of doing this is to have a dedicated, trained HR specialist who solely focuses on HR and ensuring your organisation is fully compliant with all existing and future legislation. It is also recommended for HR staff to acquire CIPD membership to help them keep up with the latest rules and regulations.

If you have an existing but untrained HR practitioner in your organisation, or a new hire that you’d like to develop into a HR role, our HR Support Staff Apprenticeship would teach them all of the fundamentals of HR and how to provide fully compliant HR advice. Our HR apprenticeship also includes CIPD Membership which is crucial for any HR professional.

As with the rest of our apprenticeships, we can access up to 95% funding from the UK Government to help pay for the cost of the programme, meaning employers only pay a 5% contribution.

You can download our HR Support Staff Apprenticeship brochure by clicking here or clicking the button below.

We hope that you found this 2-part article series about The Importance of Annual Leave helpful and have learnt something new.

Please click here to download our HR Support Staff Apprenticeship brochure! This programme teaches staff all of the fundamentals of HR and how to provide fully compliant HR advice; it also includes CIPD Membership which is crucial for any HR professional.

Missed an article? More from The Importance of Annual Leave