The Takeaway13 Business Superstitions from Around the World

Download Our Guide to '13 Business Superstitions Around the World'

We have collated 13 of the most prominent business superstitions, all from different countries around the world, into one extremely handy downloadable which you can download by clicking the button below. 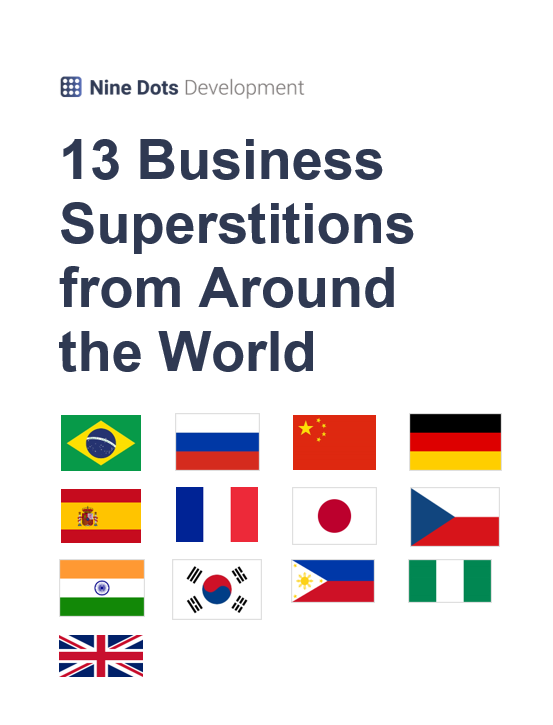 13 Business Superstitions from Around the World

Today, Friday 13th, is believed to be extremely unlucky.

Many people avoid travelling, meetings, making big purchases, and much more on this feared day.

But why is Friday 13th said to be unlucky? Where did the superstition come from? And what different superstitions are there around the world?

The Origin of the Friday 13th Superstition

No one’s sure of the exact origin of this superstition however, it is believed to come from a combination of the superstitions around the number 13, and around Fridays in general.

There are many reasons why the number 13 is believed to bring misfortune. In the Bible, Judas, the 13th disciple to sit down at the Last Supper, was the one who betrayed Jesus. Many people to this day still consider having 13 people at a dinner party unlucky - some even go as far as putting a teddy bear on an extra seat to bring the number of guests up to 14 instead of 13!

In Norse mythology, there is said to have been a dinner party of the gods where the 13th guest, Loki, ruined it and “caused the world to be plunged into darkness”.

As with the number 13, the fear of Fridays has also been around for countless years, especially in Britain where Friday was once known as Hangman’s Day because it was when hangings would typically occur.

Both 13 and Fridays have a very long history of bringing bad luck and it’s their combination that makes Friday 13th the most feared day of the year.

Is This Superstition Still Around Today?

In one word - yes. Even though the superstition is hundreds of years old, it is very much still around:

There are also many TV series, video games, books, and movies that depict Friday 13th as a day of misfortune and even death - most famously, the film Friday 13th.

The fear of Friday 13th is so prevalent that it actually has its very own name - friggatriskaidekaphobia. The term is over 100 years old now and is made up of a combination of the Norse and Greek roots words for 'Friday' (Paraskeví), '13' (dekatreís) and 'fear' (phobia).

Business Superstitions Around the World

Friday 13th is only one of many superstitions, and many countries around the world have their own unique superstitions too.

A lot of these superstitions are not only believed by the locals, but should also be considered when making business trips abroad or arranging business deals.

We have collated 13 of the most prominent business superstitions, all from different countries around the world, into one extremely handy downloadable which you can download by clicking here or clicking the ‘Download Resource!’ button at the bottom of this article.

Next time on the Daily Dot, we will be demystifying funded training by answering the most common questions we get about what apprenticeships are, how the funding works, and much more!

Download Our Guide to '13 Business Superstitions Around the World'

We have collated 13 of the most prominent business superstitions, all from different countries around the world, into one extremely handy downloadable which you can download by clicking the button below.